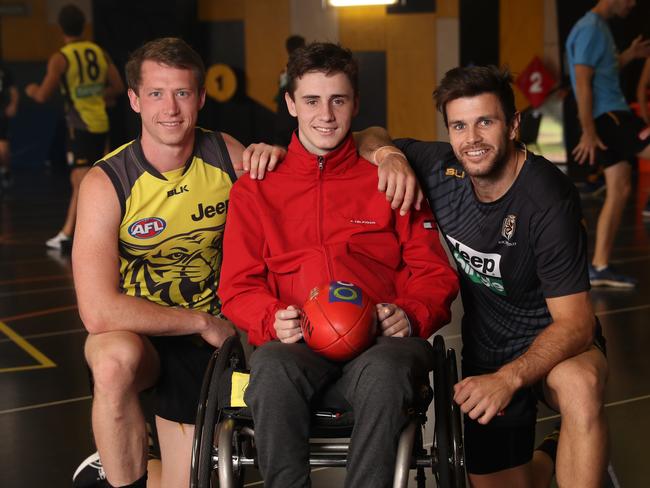 Carly Ziegler, the wife of Jack Riewoldt, details the resilience and determination of injured teen Will Murray and his family.

Sitting at their kitchen table, Emma Murray laughs as she recalls that she once was refused entry into one of the most prestigious meditation courses in America simply because she couldn’t complete a ‘silent ashram’ – a significant and extreme part of meditation in which there is no speaking, reading or eye contact made for an extended period of time (we’re talking days).

The irony is not lost on the Richmond Football Club’s mindfulness coach, who openly admits that meditation retreats are for her a tough gig given she really dislikes sitting still and simply cannot stop fidgeting. Sometimes, she puts it, these concepts are far too profound and are inapplicable to her daily life. As one of the main confidants of the players at the Richmond Football Club, Emma’s role focuses on ensuring the players perform to their full potential each and every day, whether that be through their leadership on or off the field. For many players, the mental aspects of football other than the readily practiced game plan and structures were not prevalent until Emma arrived.

As a long-time supporter of the Club and a devoted mum, Emma often dreamed that her own son, 14-year-old Will, would one day walk through the doors at the Richmond Football Club not just as a fan, but as a player. A brilliant footballer who last year captained his under-14 state side and won the best-and-fairest, it seemed inevitable that he would make it, one way or another.

Yet it wasn’t to be. Tragically, following a diving accident only eight weeks ago, Will Murray is now a quadriplegic. Since then, Will has been cared for at the Royal Children’s Hospital, undergoing not only extensive rehabilitation but a realisation that he may never walk again. When Emma speaks about Will’s accident, she describes his spine as a five-lane highway in which only one-lane is open. Will’s spine is severely bruised, and naturally so is his spirit. Not being able to walk is, for the now, the least of his worries, given the host of other problems the world of spinal injuries involves.

Yet the Murray family – Emma, her husband Nick, and their three other gorgeous children – choose to remain positive in both their language and actions. Emma is reading extensively about how she can ensure Will is ready for the day science unveils further help; whether it provides Will with the opportunity to walk or not. Because at some point, someone, somewhere, will develop something. But in the meantime, Will is just a 14-year-old who needs to live the most normal life possible, even amongst, as Emma puts it, the “levels of shitness” he encounters each and every day. As the news of Will’s accident unfolded on the playing group and football department, they were devastated. The news particularly hit Dylan Grimes hard, who had by this stage worked closely with Emma and was rocked by the unfathomable news. In his characteristically selfless and caring manner, Dylan immediately set to task organising a fundraiser to support the Murray family, committing the support of the Club whilst marshalling various auction items and donations. As Dylan puts it “a lot of us have battled injuries, surgery and setbacks, but nothing like this”.

The least the Club could do was embrace the Murray’s as one of their own, as part of the Richmond family. And embrace they did. The fundraiser successfully raised over $50,000 that will go toward a specialised rotation therapy bed for Will. Yes, welcome to the world of quadriplegics – this bed alone costs over $50,000 because of its ability to provide frequent rotation, preventing the likelihood of Will’s body succumbing to ulcers and various infections.

That night, Emma gave a rousing speech that left few dry eyes in the room. Speaking of Will’s progress, his rehabilitation, the trepidations he faces, Emma turned to the playing group and delivered a powerful message. She encouraged them to put on their boots every day for her Will. To walk for Will, and to play and fight for the ball each game for Will. She asked the group to dedicate their bravery for the game to Will and all others who can no longer play themselves. The level of emotion in the room that night tells us they will.
Emma remains passionately dedicated to her role at the Club amongst the craziness that is her current state of living: spending every inch of time possible with Will in hospital, various other appointments, picking her kids up from school, driving to sporting commitments and putting the dozens of meals that friends and neighbours have lovingly cooked for her family safely in the freezer.

In recalling the first player she met with following Will’s accident, Emma reveals the encounter was oddly fitting. It was Mabior Chol, or Marbs as he is affectionately known as by the players, the 198cm ruckman/forward whose personality matched exactly that of her sons. Both vivacious, witty and fiercely independent, there is a playful spark to Will and Marbs that is undeniably present. Understandably, the striking resemblances and dissimilarities between this player, who freely walked into the room and sat down in front of Emma, and that of her son, who lay in a hospital bed and was unable to move his own legs, hit Emma’s already aching heart.

Being angry, hateful, or fathomably distraught that her son can no longer live a normal teenage life would be a reasonable reaction. Yet Emma refuses to look at Will’s situation any other way than apprehensively hopeful, one day at a time. I asked Emma if we were one year on, reflecting on the year that was, what would we be celebrating? Her answer was simple: we would be revelling in the fact that Will had once again found new things to love about each and every day. And thus Emma’s message is clear: so often we are enveloped in the unimportant – wanting more, wanting something different, wanting your footy team to win another game. Instead, Emma encourages you to be grateful for the small things and be at peace with who you are and everything you represent.

And as Emma has since discovered, she doesn’t really want to get into that prestigious meditation course in America anyway; she and Will are learning together to once again be thankful for the small things in life, fidgeting and all.