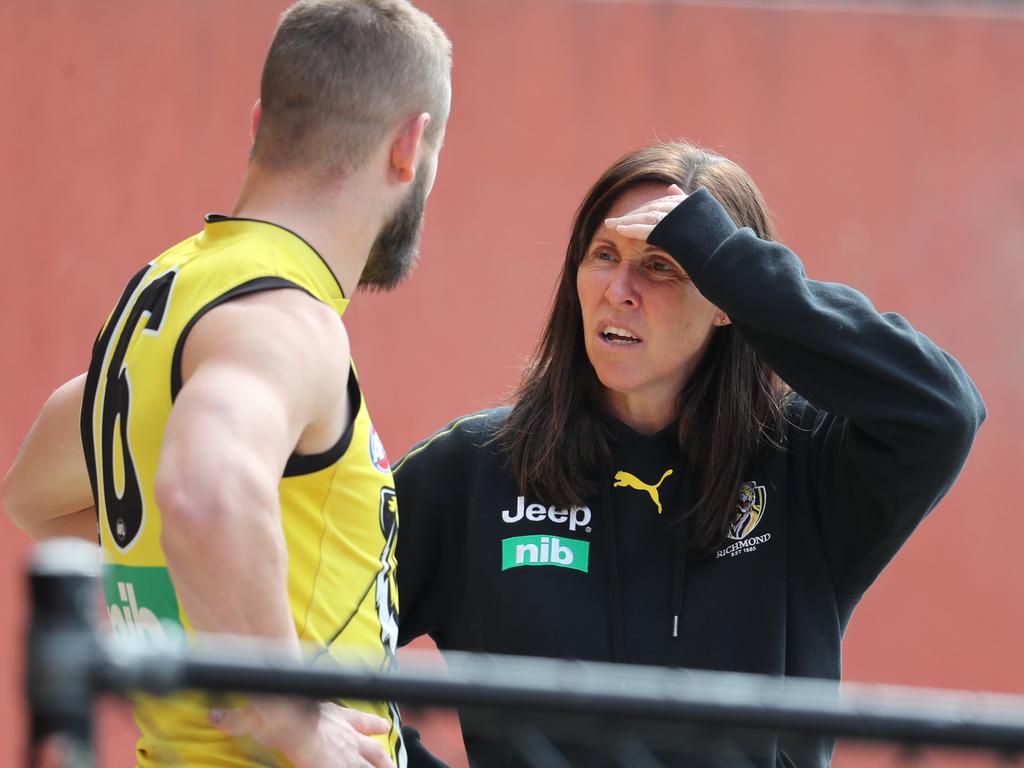 Supercars star Scott McLaughlin was a huge sceptic. But he has been almost untouchable since visiting the same mindfulness coach that helped transform Dustin Martin and Richmond’s premiership heroes. Here’s how Emma Murray does it.

Emma Murray was standing in a dark room at Punt Rd as Richmond’s players filed in.

It was two days before the Grand Final, and the club’s mindfulness coach was about to conduct her biggest session of the year.

The players were spread out with Marlon Pickett  lying down at the front of the room.

He was always at the front for group meditations.

Just as it was about to get underway, he received a tap on the shoulder from head of coaching Tim Livingstone.

Pickett tiptoed back into the room a few minutes later and lay down as Murray went about getting the players’ minds ready for the Grand Final.

Murray, who was in her third year of working with Richmond, quickly realised Pickett was distracted.

“He was very restless and even at one point he took out his phone and looked at it quickly, which was not like Marlon, or like any of the boys, at all,” Murray said.

“At the end of the meditation I asked him how he was going and asked him ‘Are you going to catch any of the parade tomorrow?’

“He said ‘Yeah, I’m actually going to be in the parade, I was just told I’m playing’.”

A shocked Murray probed the player who had just learned he would be making his senior debut in a grand final about his emotions.

“I said to him ‘Oh my God, Marlon, how are you feeling?’ and he said ‘You know, it’s just another game bruz’,” she said.

Murray then asked him why he came back into the room after receiving such big news.

“You know, to finish what I started,” Pickett replied.

Murray knew the players had taken the club’s investment in mindfulness seriously, but even she was taken aback in that moment.

Murray all but lives on her phone.

Not because she is addicted to social media, but because her clients are predominantly young athletes for whom text messaging is their main form of communication.

During the AFL season Murray works with about 40 players on Richmond’s list.

That on top of clients from other sports mixed in with juggling four children equates to a busy life and a lot of screen time.

“The amount of work I do over text messages is unbelievable,” she laughed.

Murray was once a national under-21 netball player and an Australian Institute of Sport scholarship holder.

A string of injuries and her “mindset” held her back from reaching the top.

She went into coaching and picked up a book by legendary NBA coach Phil Jackson called Sacred Hoops.

It detailed how the Michael Jordan-led Chicago Bulls used meditation and mindfulness in the 1990s to help them dominate for almost a decade.

The Bulls’ mindfulness coach was George Mumford, who was not a sport psychologist but rather the “bodyguard of their minds”.

Murray was fascinated and threw herself into mindfulness and meditation, back in a time when not too many people were talking about it.

“I had had access to sports psychology when I was at the AIS but that was something I never thought I needed,” she said.

“But here was something that was more based in an actual tool about being present and actually training the mind like it was a muscle.

“It really appealed to me; this concept that we train our body, and this team was training their minds.”

Murray became a qualified psychotherapist and clinical hypnotherapist, and then went about using her skills to help athletes.

She could relate to their struggles because she had been there before.

“Working consciously with a sport psychologist had never really helped me, but all of a sudden I had tools which could enable me to go into someone’s subconscious mind and change it around,” she said.

“I really sit in that space of, ‘let me help you perform at your best’.”

“This is not fluffy kumbaya, we just want them making the best decisions in that moment.”

THE TIGERS: IT STARTED WITH DYLAN GRIMES

Defender Dylan Grimes felt like he was not realising his potential and needed something to help him reach the next level.

Hamstring injuries had become a recurring issue and he wanted answers.

He turned to Dan Richardson, Richmond’s then football general manager, who knew Murray’s husband, Nick, and was aware of Emma’s work.

Murray came in and Grimes achieved quick results in both body and mind.

“It was just stopping his subconscious mind from operating that file.”

The buzz quickly spread among the players, and by the start of 2017 she was on contract working with the entire list.

That year Richmond would win its first premiership since 1980.

Each week at Punt Rd, Murray meets with the team by positional lines and each group mentally reviews the previous game just played.

There is a second session later in the week that involves group meditation to help prepare their minds for their upcoming game.

Murray is in the rooms pre-game where she holds “visualisation meditations” with groups of players at a time.

At halftime, she is available for whoever needs her.

Maybe a player had committed a bad turnover that kept replaying in his mind and he needed to reset.

Murray would then go into the player’s subconscious and “pull out a file and put in a new one” before the start of the second half.

“There’s something really powerful in going into your subconscious mind, taking out that fear, replacing it with your strengths and ‘boom’, off you go,” she said.

Nothing is compulsory, but each year more and more Tigers have come to Murray’s work.

“This year it has been even more powerful again because you get less boys that are resistant,” she said.

“Dylan (Grimes) embraced it and then got quick results so it was easy for him to embrace it.

“But it’s very difficult to go into a team environment because mindfulness and mindset work is best when you’re seeking it out as an individual.”

Jack Riewoldt has previously said Murray was instrumental in turning the Tigers around at the end of 2016.

“They’re unbelievable and I feel blessed to be a part of it,” she said.

“I feel like you could hold Richmond up among some of the world’s best businesses, like your Googles and your Legos and they would stack up.”

Richmond heavily invested in mindfulness by committing one of its most valuable resources – time.

“AFL is such a busy schedule, and what they do I don’t think people realise how hard it is to fit something like this into the schedule,” Murray said.

“When a coach and a leadership group and the sports performance head in Tim Livingstone see that this is valuable and they’re going to put time aside for it and actively listen and partake, everyone falls in line.

“I am absolutely aware that if that didn’t happen at Richmond, then I wouldn’t be where I am.”

The big question now is will the Tigers be able to claim back-to-back premierships in 2020?

WHAT IT DID FOR DUSTY

In 2016, the word about Murray reached the ears of Dustin Martin.

Grimes was the first to fully embrace her work, followed by Sam Lloyd, David Astbury and then ‘Dusty’.

Murray began working with an intrigued Martin, who took to her teachings and would later thank her in his on-stage speech when he won the Brownlow a year later.

“If you look at 2016, there was a point where Dusty started getting Brownlow votes,” Murray said.

“Not because of me but because he was starting to get a better handle on his attention and his focus and coming into the moment and stepping into his best.”

Today, Martin meditates daily, is into yoga and has discovered a love of books.

“What is great about Dusty is that while this opened a little door for him, he has gone on his own journey,” Murray said.

“He’s very curious and very connected to that space and he goes seeking, he reads, he learns, he listens.

“Not just to me but to a whole lot of people.”

Supercars star Scott McLaughlin revealed he was in a bad place when he first turned to Murray.

It was early last year, just months after a mistake in the final laps of the last race of the season cost him his maiden championship.

That loss left the Ford Mustang pilot with a lot of emotional baggage and those close to him knew it.

Riewoldt is a mate of McLaughlin and he was quick to refer him to Murray.

“He (Riewoldt) said she (Murray) had turned the Tigers around – they’d just won the 2017 premiership after being down the ladder the year before – and how she’d helped make that happen,” McLaughlin wrote in his book Road to Redemption.

They began working together, which involved a “brutal” reliving of everything that happened in that final round in Newcastle.

Every lap, every radio communication, the positives of the weekend and the negatives were all spoken about in depth.

It made him angry at times, but the process finally allowed him to move on.

They continue to work closely to this day.

“Emma wants to speak to your brain – to set it up so it has triggers that immediately click into action,” McLaughlin wrote.

“I know what you’re thinking reading this – this is complete and utter bulls–t — and I used to be exactly the same. But now I’m hooked.”

McLaughlin has been almost untouchable since he started working with Murray, winning the 2018 championship, this year’s Bathurst 1000 and has just clinched back-to-back titles.

“Scott does the work, and then what I effectively do is say, ‘let me just remove the roadblocks that are going to trip you up’,” Murray said.