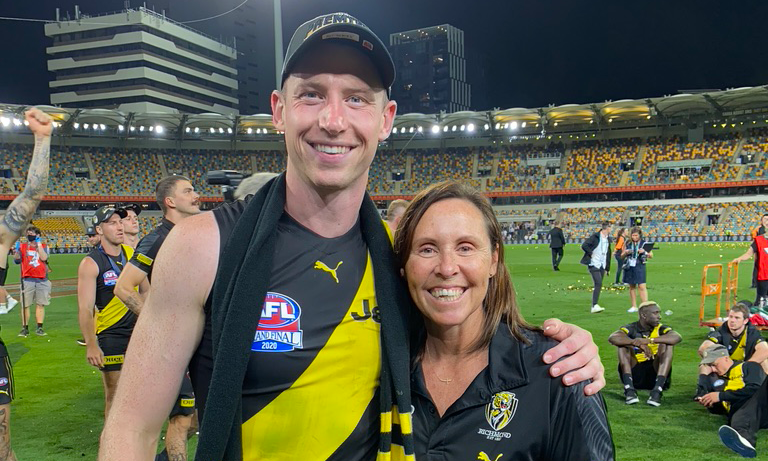 The significance of Emma Murray's methods in Richmond's 2017 premiership triumph, their first in 37 years, should not be downplayed. Anthony Colangelo chats to Dylan Grimes and mindset coach Emma Murray on some of the secrets to Richmond’s performance success.

Before the 2015 season Dylan Grimes was looking for a spark.

The Richmond defender lacked confidence in his ability and was battling to maintain peak performance for as long as AFL football required.

That frustrated Grimes, because after a series of hamstring injuries, he finally felt physically capable of competing with most players but couldn’t understand why during games he “wasn’t living up to those physical standards”.

Grimes had been reading, and two books in particular – Dan Millman’s Body Mind Mastery and Mihaly Csikszentmihalyi’s Flow – introduced him to mindfulness and how better controlling your mind could enhance performance.

“The books outlined this flow,” Grimes told Fairfax Media. “A state that athletes found themselves in by luck but I wanted to know how to find it more regularly.”

“The feeling of flow”, Grimes explained, is the feeling of being totally present and in control of your body, actions and mind while playing.

Grimes asked the club if they knew anyone who could help with this.

Murray met Richardson, then Murray was introduced to Grimes and things changed for the defender instantly.

“I realised quickly with Emma that the problems I faced – confidence or finding flow or maintaining peak performance mentality – every athlete faces the same battles,” Grimes said.

“I felt instantly the problems I worked on with Emma were normal. That was a relief because sometimes I felt isolated having these mental performance problems.”

Later in 2015 David Astbury began working with Murray, as did Ben Griffiths, Sam Lloyd and Shaun Hampson. In 2016 the players involved in one-on-one sessions with Murray doubled, according to Grimes.

Dustin Martin began seeing Murray early in 2016 and by the start of 2017 Richmond made Murray their “competitive edge” and participating in her program became compulsory.

By the end of 2017 Martin, according to Grimes, was the player most engrossed in Murray’s program.

Martin was at the Murray’s family home so regularly that playing PlayStation with their teenage son Will – who became a quadriplegic the day before Emma began work with Richmond in 2016 – was a pre-game ritual of sorts.

The significance of Murray’s methods in Richmond’s premiership triumph, their first in 37 years, should not be downplayed. While it is not the reason they won, it certainly was integral.

Martin mentioned Murray by name when speaking to media after his Brownlow win while Trent Cotchin did so too at the club best and fairest days after the grand final.

Author Konrad Marshall – who spent 2016 and 2017 with Richmond to write his book Yellow & Black – devoted more than two chapters of the book to detailing Murray’s work with the players.

Murray was an elite junior netball player but injuries cut her career short. She went onto coach netball and through those experiences felt athletes needed more mental assistance.

She’d read how mindfulness guru George Mumford helped Phil Jackson’s legendary Chicago Bulls team in this space, and with an undergraduate psychology degree behind her decided to pursue it as a career by gathering formal qualifications to become a mindfulness practitioner.

What does Murray do, exactly?

She teaches athletes to focus totally on the game.

“Mindfulness for me is about what’s happening right here, right now. So for you, your bum is on the chair, your feet are on the floor and you’re listening to me,” Murray tells me, as I sit “in the chair Dusty sits in” at her home office.

“Right now you’re listening to me, so you have your attention on me. But you only have ‘one attention’, it can’t be in two places at once.

“So a big thing for an athlete to understand is when your attention leaves the present, it is no longer there. When you bring it back you’ve skipped a bit of what you’re living in, like the game.

“In a game if your attention goes to the score or the crowd or the mistake you just made then that can effect a player’s physical output, like their timing.”

Getting your attention or concentration back when it leaves, Murray explains, is like a bicep curl.

“Your attention goes [Murray extends her bicep curl] and then you bring it back [Murray draws her fist back to her shoulder] and the more you practice it the easier it is to bring the concentration back.”

That practice comes through visualisation, meditation, private sessions with Murray and practising mindfulness in everyday life.

Murray said athletes never come to her saying the pressure of sport or the crowds or the moment is getting to them. Rather, they want to find out “why they’re ball-watching or why their timing had gone in their mark or why a rower might be struggling to keep their attention on their boat or why a gymnast is falling off the beam?

“They’re not saying ‘I’m not standing up in a big moment’, it’s actual stuff that’s gone wrong in their performance they want to fix.”

So Murray works with the players, one-on-one or in groups, to establish ways to keep their mind in the game and not on what might be distracting them from it.

“They might be experiencing really heavy legs when they wake up in the morning or in the warm-up or the game.

“Their attention then starts going to their heavy legs and it is no longer on what they’re doing in the game.”

So what do you do when you’re on the MCG in front of 100,000 people in a grand final and your timing goes, or you’re not performing at your physical peak because of your concentration?

“The biggest thing is the awareness that something’s gone,” Murray said. “A lot of players say they don’t remember parts of big games; ‘it was a blur’, they say, because they’re not properly present or aware of where they are and what they’re doing.

“We do a lot of work in the pre-season to build that awareness.”

Then it’s about words and movement – the players doing certain things with their body or remembering words that help them snap back into focus.

For some players it’s about their posture, puffing their chest out and lifting their head so they can communicate clearly. For others it’s about always moving their feet.

Remembering words and to move in a certain way isn’t new, but the way Murray teaches them to use these actions to snap into a certain mental space of control, no matter what the situation, is what’s important.

So too is the environment the players learn these techniques in.

Before every weights session, Richmond’s defenders meditated. Every week individuals and each line (and group within the lines) would meet with Murray to either meditate or talk about ways to improve their “mind muscle”, as Murray put it.

To do that, they had to be vulnerable. They had to openly admit mental frailties during games and talk about what they found hard in front of teammates.

At a footy club, that’s virtually counter-cultural. Traditionally at a footy clubs you push through pain, you don’t speak about performance challenges for fear of being deemed “weak” and you use the fear of failure to drive you.

Not in Murray’s world. She remembers how it felt, as a netball player, to bottle emotions and struggles.

“The boys coming into clubs now communicate in a different way. For a long time the AFL as a whole had processes and systems based on accountability through naming and shaming or pointing fingers or being more punitive. That was fine however long ago but things have shifted.

“A lot of people working AFL clubs, they played like that and it was OK for them so they carry it on but it doesn’t make sense to kids these days and it doesn’t make them feel comfortable or get the best out of themselves.

“There is accountability at Richmond, but it comes through compassion.”

The compassionate environment was led by Damien Hardwick and Trent Cotchin, who changed in the off-season, Murray said.

“Their openness and willingness to share, it was about saying ‘it’s OK not to be perfect and it’s OK not to get it right’. It was OK to be vulnerable. And that spread through the group and when you get close with people it’s so hard to judge them unfairly.

“That’s when the magic happens, they set that tone and had the courage to do that and that gave everyone the permission to feel safe and be the same.”

Grimes joked that “if you’d told me eight years ago when I got drafted that I’d be meditating with the entire backline before every weights session I would have laughed in your face.”

Murray said that by the grand final trouncing of Adelaide (a team who also used meditation, albeit differently to Murray’s methods), Richmond were nearing mental impenetrability.

“They have solid strategies that everyone uses, tailored to each individual, but everyone knew each other’s triggers and were able to help each other back.

“No player, by the grand final, was going to be left alone off in the world.

“If a player couldn’t do that themselves then a teammate would help them, or a coach, or someone on the bench.

“It wasn’t viewed as failing if you went to a mentally unhelpful place. It was viewed as part of the game and you were helped to come back rather than looked upon as weak or unprofessional.”

Article by Anthony Colangelo, The Age